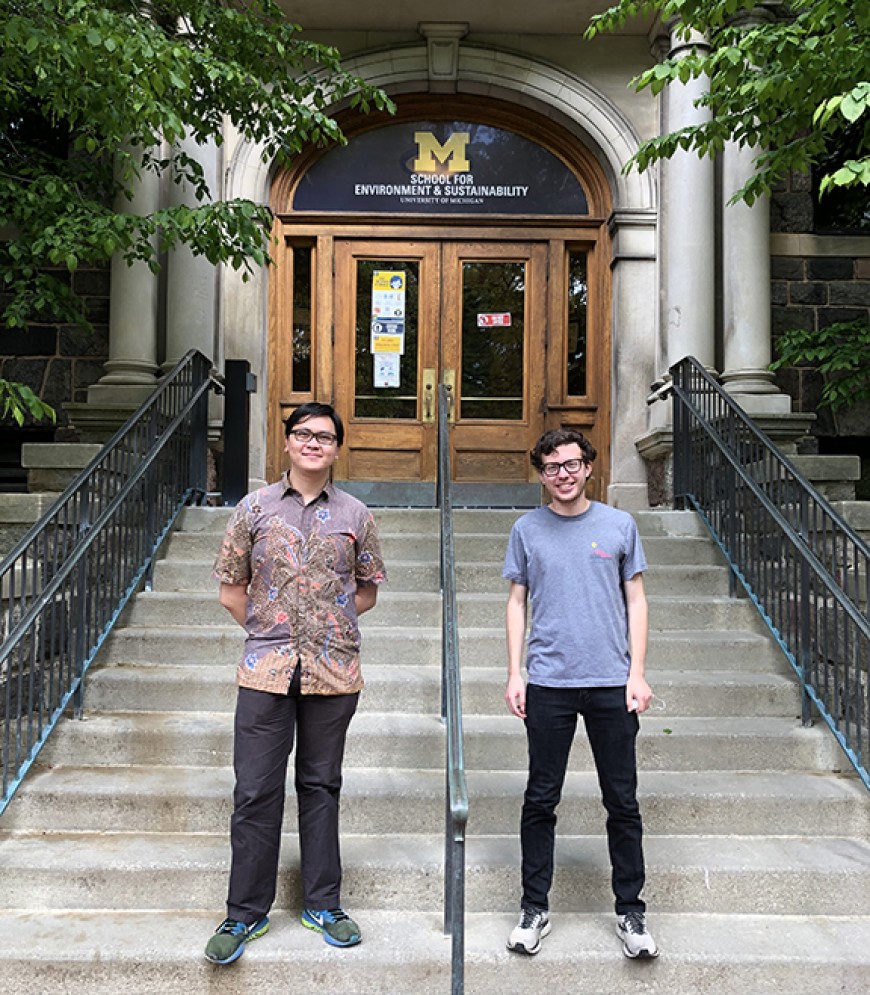 Documentaries are often used to expose a larger audience to societal problems and inspire institutional changes. Translating this inspiration into concrete action is almost a greater challenge than the filmmaking process itself. The Last Animals, a 2017 documentary by former U-M Knight Wallace Journalism Fellow Kate Brooks, focuses on the killing of African elephants and rhinos. It reveals the factors contributing to the crisis, such as “highly effective poaching and trafficking syndicates,” and also sheds light on the working conditions of the conservationists, park rangers, and scientists leading the fight to protect these endangered megafauna.

Dr. Rebecca Hardin of the School for Environment and Sustainability (SEAS) was an academic advisor to the film, and later created a nonprofit with Brooks, The Last Animals Foundation, in the hope of advancing inspiration from the film toward meaningful change. The foundation later became a client of the SEAS master’s project, “Digital Media, Data, and Dialogue in Dismantling the Illegal International Trade of Wildlife.”

After being mutually inspired by meeting each other at the SEAS Master’s Project Fair, Aditya Benyamin (MS/MPP ’21) and Ryan Horwitz (MS ’21) teamed up for the master's project and began their distinct yet complementary tasks. The project involved various components, all with the goal of advancing the core values of The Last Animals, which are to promote “public engagement and legislative action to prevent the illegal poaching and trade of endangered wildlife.”

Work on the project took place between 2020 and 2021 and originally included plans for international travel, but with the Covid-19 pandemic, work was forced to shift online. “The hardest part of the project was building trust with local partners and connecting with organizations in Indonesia and Africa purely through an online basis," says Benyamin. "It’s really hard to build trust by only utilizing WhatsApp and other applications.” In order to tackle the multifaceted project, the team divided and conquered while working closely with Brooks, the documentarian. Project work was divided up so that Benyamin focused on the educational materials while Horwitz was the key point person on the StoryMap and ivory seizure network.

Although the project at first focused on the social impact deliverables of the discussion guide and StoryMap, both Horwitz and Benyamin built out more complex research deliverables that were value-added for the Foundation and its key international collaborators. In the end, though, the project had many different aspects focused on conservation, and all centered on a concept that has increasing popularity in academia: accessibility.

The film itself had the potential to impact behaviors of locals within the Leuser Ecosystem, but the film was not available in their language. As Benyamin explained, “no one can learn if no one knows the language. There is no hope for a larger impact if we did not adapt the film by translating and dubbing it into Indonesian.” Benyamin went sentence by sentence through the translation to ensure that The Last Animals was understandable for people outside of the scientific community. “Making sure that it was accessible across national communities with different levels of learning means that the messages it conveys have a larger impact on conservation,” he says.

Accessibility is also reflected in the choice of scientific journal. Hardin pushed for their article on the project to be published in a small independently owned journal that emphasizes accessibility instead of restricted access. The StoryMap and ivory seizure network developed by Horwitz focused particularly on visual accessibility, including large readable fonts, intuitive design, and color schemes that were color-blind accessible. The StoryMap is publicly available and can be accessed online. The ivory seizure network application, showing locations and the extent of poaching in particular animal families, is still in the process of being published and finalized, but will ultimately be intended for use beyond an exclusively scientific audience such as governmental actors. In both cases, these students have created deliverables that can be used long after the end of the specific project, and by communities across the globe.

Starting a master’s project can be a daunting task, especially when a large amount of work is to be completed concurrently with classes and other studies. Benyamin and Horwitz expressed enthusiasm for their complicated project. “I was drawn to the project because of my background with mapping," says Horwitz. "I originally didn’t want to work on a project centered on charismatic megafauna because they are often overvalued when compared to other organisms, but after working on the project I’m now inspired to apply to jobs in wildlife and environmental crime, parallel to the themes we worked on addressing with this project.”

Benyamin and Horwitz want to see their project and its deliverables used by agencies to advance change related to the poaching of endangered animals. “I’m looking forward to seeing how everything is going to be used and built upon in the future," Horwitz adds. "Especially in regards to the ivory seizure network, which we hope will be utilized by international prosecutors to target kingpins driving the illegal trade of ivory instead of solely targeting locals who are simply trying to survive."

The work enacted by the project team not only inspired the students, but also the advisors. Hardin plans on taking the lessons learned from this project and adapting them into future SEAS classes, while Brooks was motivated to return to graduate school in her home city of Washington, D.C. The two co-advisors note that Benyamin and Horwitz displayed intercultural teamwork and a passion to help the human communities that protect wildlife in ways that will be a source of inspiration for a long time to come.