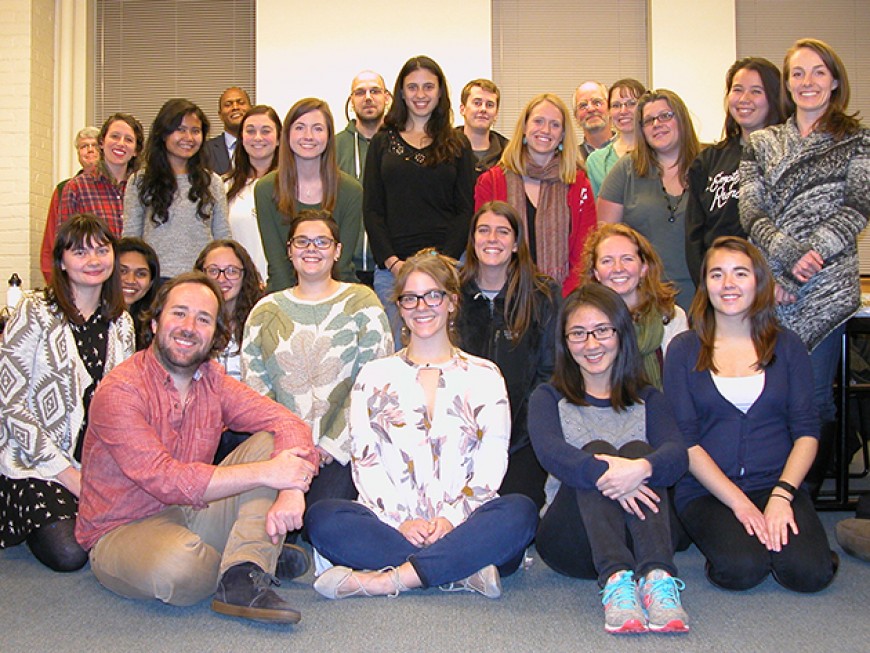 Like many courses at the School for Environment and Sustainability (SEAS), Localization: Transitional Thinking for the New Normal contends with how different the world may look in the near future and how society can respond to environmental challenges like climate change and the depletion of resources. But that is where the similarities end.

The Localization seminar begins with the premise that we live on a planet with finite resources, and thus society will inevitably undergo a process called resource descent or energy descent. Our ways of life will be dramatically altered, and we will need to adjust to a new biophysical reality with new limitations and challenges, which will require creativity in imagining new ways of doing, well, everything.

“If all the strategies we had developed actually worked as intended, then we wouldn’t be in this pickle. So we need to rethink how to respond to the new biophysical reality,” said Dr. Raymond De Young, who, along with his colleague Dr. Thomas Princen, has been co-teaching the Localization course at U-M for more than 15 years and grappling with the ideas of resource descent and local provisioning for decades. Both Dr. De Young and Dr. Princen are associate professors at SEAS.

Being grounded in reality means that localization rejects unfettered techno-optimism, or the idea that there is a technological fix for all of our problems, in favor of the idea that we can solve our problems. Communities and individuals can establish systems of provisioning resources that are sustainable, local, and operating within the natural limits of the world in which they live.

Localization is an alternative to the other more prominent ways we might respond to ecological crises, which, in Dr. De Young’s view, are limited to embracing green technology or accepting the inevitable collapse of society. If you don’t sign on to the green growth model, then you’re giving in to the collapse—which is a false dichotomy that Dr. De Young calls “the myth of the modern era.” While technology will be useful for our transition to another world, there are problems we’ll be facing that technology will not be able to solve.

“For me, localization is a way to visualize downsizing,” said Katie Barr, who contributed to the course as a graduate student instructor in Fall 2021. “Localization kind of focuses on how you can address a lot of these issues without having to rely on massive unsustainable systems.”

Encountering skepticism is a natural part of the work of localization, as its premise is quite different from what most people—even most environmentalists—tend to know and believe. Overcoming this skepticism in students is something the course does very well, Barr thinks, because it shows students that localization is more realism than it is idealism.

“We’re not trying to paint a picture of an idyllic future or world, we’re just trying to provide another option for a way forward to how we could potentially deal with some of the issues that we’re dealing with right now,” Barr said.

Localization and the optimism effect

Localization is different from most other courses at SEAS in myriad ways, but to Barr, the most significant among these differences is that the course creates a more positive and optimistic framework for approaching climate change and other environmental issues.

“A lot of the classes that we take at SEAS, through no fault of their own, focus primarily on the doom and gloom situation of facing climate change and all of the terrible things that are going to happen as a result of it,” Barr said. “With Localization, it’s like, okay, let’s sit down as a group and just discuss ways that we can actually move through this process to create a better future for ourselves. It provides an outlet for people to be creative and to envision a world that they would actually want to live in and pursue.”

First-year master’s student Sally Phipps, who took the course in Fall 2021, found that Localization gave her a sense of efficacy, compared to the futility and helplessness many people feel in the face of the climate crisis.

“It definitely puts what I feel is a healthy burden on you, because the steps we are told by the media or even other SEAS courses or this discourse on the environmental challenges, they seem really insurmountable and the steps you would need to take as an individual to fix them are not within your means or skill set,” Phipps wrote in a course reflection. “Localization bypasses this in an unexpected way, by showing you not only how to escape this trap, but also why it’s better to escape this perspective and how to prepare you for when you are already there.”

These feelings of optimism for the future come as a welcome surprise to Dr. De Young, who says that students haven’t always reacted that way over the years. But it makes sense to him that students living under the weight of present and future environmental crises every day would find hope and purpose in producing tangible solutions to such massive problems.

One way that the course inspires optimism in students is by showing them that localization work is already happening in their communities, and that they can become a part of it right away. By bringing the real world into the classroom, Dr. De Young aims to demonstrate that the best ideas and practices often come from local communities and individuals responding to the new biophysical reality. One example that he points to is the local food movement, which didn’t exist until small community groups began organizing farmers markets and Community Supported Agriculture (CSA) programs a few decades ago. They experimented, networked, and shared successes but always remained committed to creating a local provisioning economy, he noted.

“I think that practice out in the field, in the reality of everyday life, is moving far faster than the university is, and it’s not doing it because of the university or other traditional institutions,” Dr. De Young said. “I think we need to go back to those local folks who created a local food movement or local psychological well-being movements or local initiatives around climate action plans, and we need to find out how they’re doing it and help them to the degree we can, but not privilege ourselves in that conversation.”

Rather than merely observing the work of others, the course allows students to practice using localization principles in their daily lives and develop a sense of efficacy. Barr recalled a group of students who worked on localizing clothing production, from sourcing local organic fabrics to spinning their own wool to building a seven-foot loom. Another group focused on foraging for food and other goods in the local environment (not as a survivalist practice but as a possible component of the everyday lived experience of a circular economy), while a different one worked on localizing the production and distribution of menstrual products. Conducting many such small experiments is integral to the process of localization.

“The class itself really encourages students to look at the concepts that we are barn raising together and then apply them directly in their own lives in their own way, with fewer constraints, to allow for that creativity,” Barr said.

Enacting the principles of localization through group or individual projects allows students to think of themselves as “behavioral entrepreneurs” who can experiment with new practices and use the process as a tool for discovery and deeper understanding. That students are able to undergo this process of discovery is more important to the instructors than any product the students actually create.

“Under localization, we have to get everyone to be an inventor, a creator, a sharer of these ideas,” Dr. De Young said.

While the Localization course is geared toward students in the Behavior, Education, and Communication specialization, the seminar is popular with students from other SEAS specializations and departments across the University. Envisioning a sustainable future for society and coming up with the steps to get there requires a diverse skill set and knowledge base, Dr. De Young noted, so the course works best when it’s filled with students from a variety of backgrounds.

“We’re trying to create conditions under which people will solve these problems back in their own field, so we want to create a space for collaborative participatory problem-solving,” he said.

Storytelling plays an important role in the course, as learning through real-world narratives and experiences makes it easier for students to overcome those barriers of skepticism and helplessness and truly envision that a more sustainable world is possible. Optimism can be infectious, and the localization movement can grow through students sharing their visions for the future and inviting others to join their work.

“People don’t see a future for themselves if they can’t envision a way through this,” Dr. De Young said.