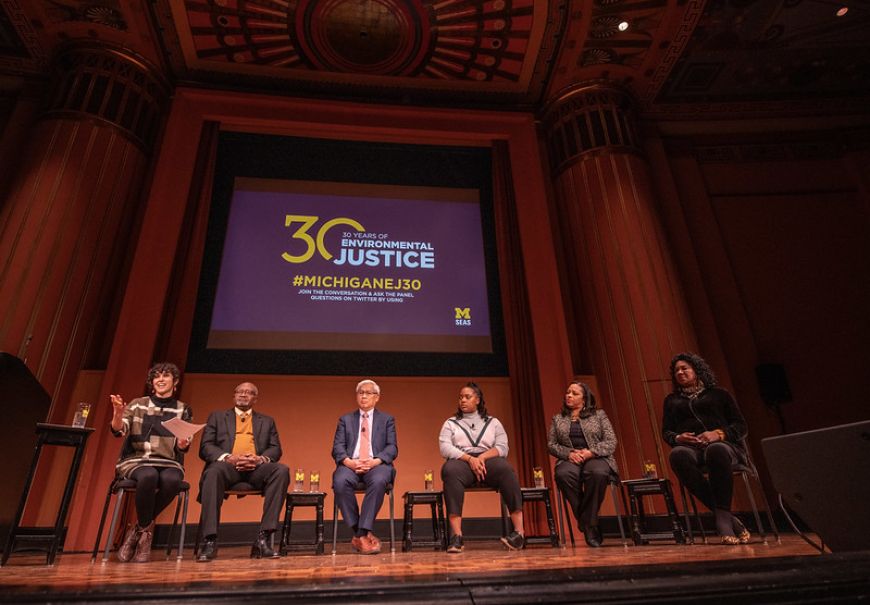 The Michigan Environmental Justice (EJ) Summit 2020 commemorated the 30th Anniversary of the 1990 “Michigan Conference on Race and the Incidence of Environmental Hazards," the landmark event that sparked high-level government meetings and contributed to the formation of an Environmental Protection Agency special task force under the Clinton administration. To honor that event—and to inspire a "call to action" moving forward, the 2020 Summit brought dynamic national and regional community leaders, along with SEAS students, to Rackham Auditorium for the February 13 three-part event.

Kicking off the Summit, the EJ Student Flash Talks showcased interdisciplinary research and projects from the next generation of environmental justice advocates. In a series of fast-paced Flash Talks, 12 students presented their findings on a wide spectrum of pressing environmental justice issues—ranging from food-access inequities to the restoration of tribal lands. Working across disciplines with community partners, these students bring fresh voices and a sharp lens to equity, justice, and environmental challenges.

Community leaders who have “boots on the ground” in the progress and pursuit of environmental justice shared their insights on this action-oriented panel, moderated by SEAS Professor Paul Mohai. On stage was Theresa Landrum, co-founder of the 48217 Community & Environmental Health organization; Andrea Pierce, chair and co-founder of the Anishinaabek Caucus within the Michigan Democratic Party; and Donele Wilkins, founder and CEO of the Detroit-based Green Door Initiative.

“It is not OK if we have children that cannot breathe, if we have households that cannot drink safe water, if we have schools that aren't clean enough and are triggering asthma attacks. It's not OK. My kids deserve to breathe clean air like anybody else's. My children deserve to be on playgrounds free from contamination, and to be in schools safe, where they can learn and they can thrive. So, if I leave you with anything, walk away knowing that it’s is not OK. And that It takes all of us to make it right for the least of us.” - Donele Wilkins

SEAS Assistant Professor Tony Reames, who had covered the day’s events on SEAS Instagram, joined the panelists on-stage to convey a few questions from the community. In closing, Reames echoed Dr. Bullard's earlier call to action. "I think Dr. Bullard said it best when he said that it's all right to come up here and commemorate and celebrate the past 30 years," said Reames, "But we all must take this opportunity to rededicate ourselves to the fight of environmental justice...we're moving forward for the next 30 years."

Dr. Robert Bullard,  known as the “Father of Environmental Justice,” named one of 13 Environmental Leaders of the Century (Newsweek, 2008)

Read the coverage of the National Panel of EJ Game Changers on the Michigan Daily.

The 1990 “Michigan Conference on Race and the Incidence of Environmental Hazards,” organized by Bunyan Bryant and Paul Mohai, helped to springboard environmental justice as a legitimate academic endeavor, and sparked high-level government meetings. These meetings contributed to President Bill Clinton signing the Executive Order “Federal Action to Address Environmental Justice in Minority Populations and Low-Income Populations” and a special task force by the EPA.