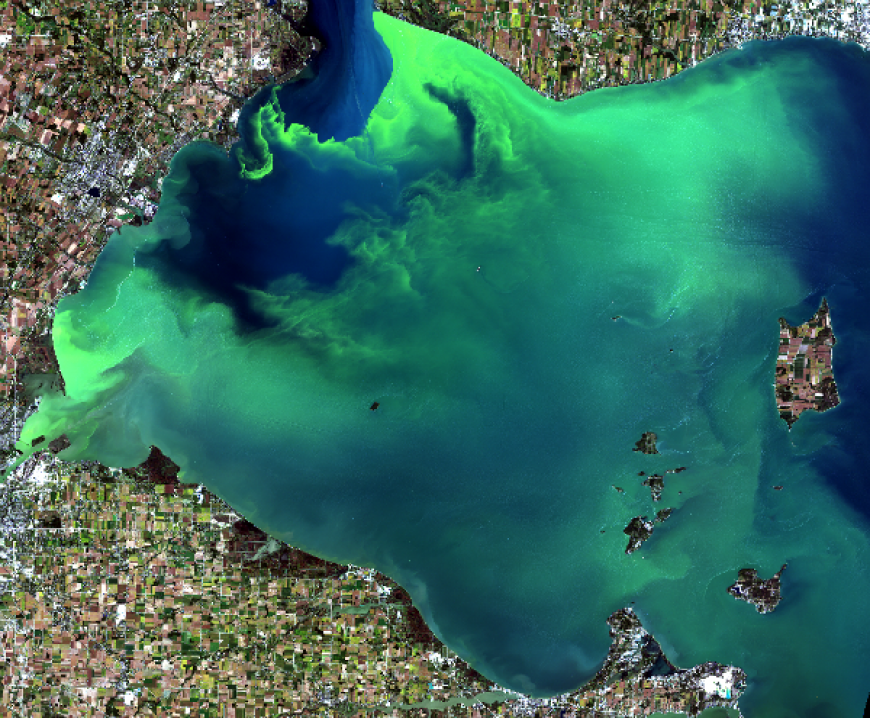 University of Michigan researchers and their partners are forecasting that western Lake Erie will experience a moderate harmful algal bloom this summer.

This year’s bloom is expected to measure 4.5 on the severity index—among the smaller blooms since 2011—but could possibly range between 4 and 5.5, compared to 7.3 last year. An index above 5 indicates the more severe blooms.

This year’s forecast was released today by the National Oceanic and Atmospheric Administration, which funds the research.

Lake Erie blooms consist of cyanobacteria, also called blue-green algae, which are capable of producing the liver toxin microcystin and which pose a risk to human and wildlife health. The severity index is based on the bloom’s biomass—the amount of algae—over a sustained period. The largest blooms occurred in 2011, with a severity index of 10, and 2015, at 10.5.

“This year’s predicted moderate bloom is not to be interpreted as significant progress toward the Great Lakes Water Quality Agreement goal of reducing phosphorus inputs in Lake Erie by 40% because year-to-year changes are driven primarily by the amount of spring rain,” said U-M aquatic ecologist Don Scavia, a member of the forecast team. 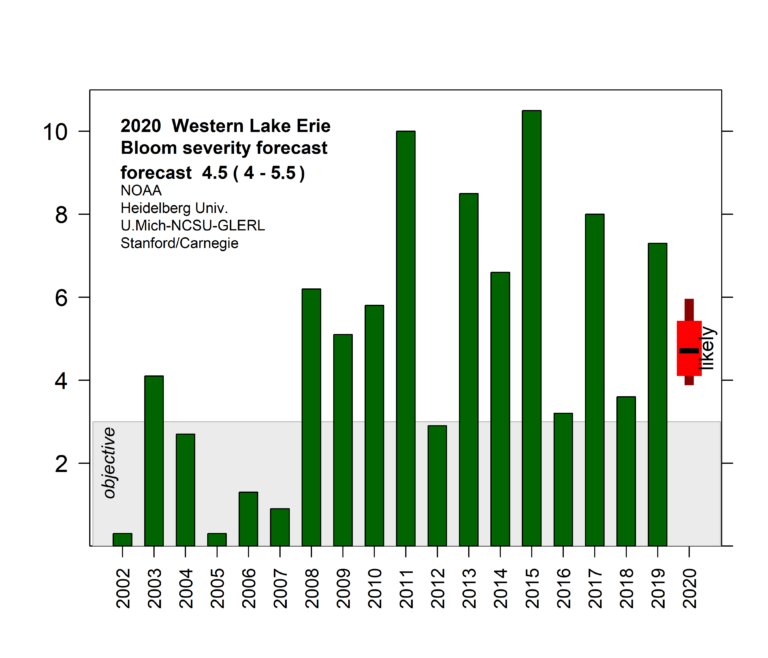 “We cannot cross our fingers and hope that drier weather will keep us safe,” said Scavia, a professor emeritus at the School for Environment and Sustainability.

“These blooms are driven by diffuse phosphorus sources from the agriculturally dominated Maumee River watershed. Until the phosphorus inputs are reduced significantly and consistently so that only the mildest blooms occur, the people, the ecosystem and the economy of this region are being threatened.”

The annual summer blooms can result in higher water-treatment costs for cities and local governments. They can prevent people from enjoying fishing, swimming, boating and visiting the shoreline, and they harm the region’s vital summer economy. These effects will vary in location and severity due to winds that may concentrate or dissipate the bloom.

NOAA, the Environmental Protection Agency, Environment and Climate Change Canada and its other partners have set a goal of reducing the Lake Erie bloom to a 3 on the severity index, which was last seen in 2012.

The size of a bloom isn’t necessarily an indication of how toxic it is. For example, the toxins in a large bloom may not be as concentrated as in a smaller bloom. Each algal bloom is unique in terms of size, toxicity and ultimately its impact on local communities. NOAA is actively developing tools to detect and predict how toxic blooms will be.

“A smaller bloom forecast for Lake Erie and the surrounding coastal communities is encouraging, but we cannot be complacent,” said Nicole LeBoeuf, acting director of NOAA’s National Ocean Service. “It is our hope that these science-based tools will help local leaders plan for the predicted bloom and best position the community and its visitors to deal with what comes.”

With cool lake temperatures in May and early June, the cyanobacteria only started growing in the last week, according to NOAA. Agency experts expect a more typical start of the visible bloom in mid-to-late July.

Current extremely high lake levels are not expected to have a significant effect on the bloom size. While the bloom typically produces some toxins, it is too early to predict how toxic the bloom will be when it starts. However, calm winds tend to allow the algal toxins to concentrate near the lake’s surface.

The duration of the bloom depends on how windy September may be, which cannot be predicted this far in advance. The bloom will remain mostly in the lake’s western basin, and most of the rest of the lake will not be affected.

“The expectation of a smaller bloom than 2019 is clearly something we should welcome. Nevertheless, we still have work to do,” said Christopher Winslow, director of Ohio Sea Grant and Stone Laboratory. 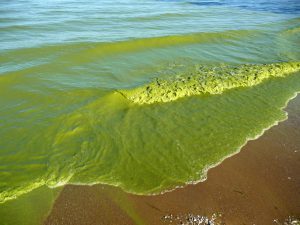 In addition to the early season projections from NOAA and its partners, NOAA also issues HAB forecasts during the bloom season. These forecasts provide the current extent and five-day outlooks of where the bloom will travel and what concentrations are likely to be seen, allowing managers to determine whether to take preventative actions.

“While the bloom this year probably will not be as mild as in 2018, we still expect to see large areas without substantial effects. This depends on where the bloom gets pushed by the wind, so anyone using the lake needs to regularly check the location of the bloom.”

NOAA is now routinely using the high quality satellite imagery from both of European Union’s Copernicus Sentinel-3 satellites, which were designed to detect blooms in large lakes and estuaries. The cells that cause the bloom can float and sink in the water, allowing them to collect nutrients through the water and get to sunlight near the surface.

This information is especially of interest to water treatment plant operators because intake structures are usually located below the surface, so the risk of toxins in their raw water may be greater when these cells sink. This year’s forecast includes an improved model that provides more accurate predictions and visualizations of where the bloom is located within the water column.

Nutrient load data for the forecasts came from Heidelberg University. The various forecast models are run by NOAA’s NCCOS, the University of Michigan, North Carolina State University, LimnoTech, Stanford University and the Carnegie Institution for Science.

Read the story on Michigan News