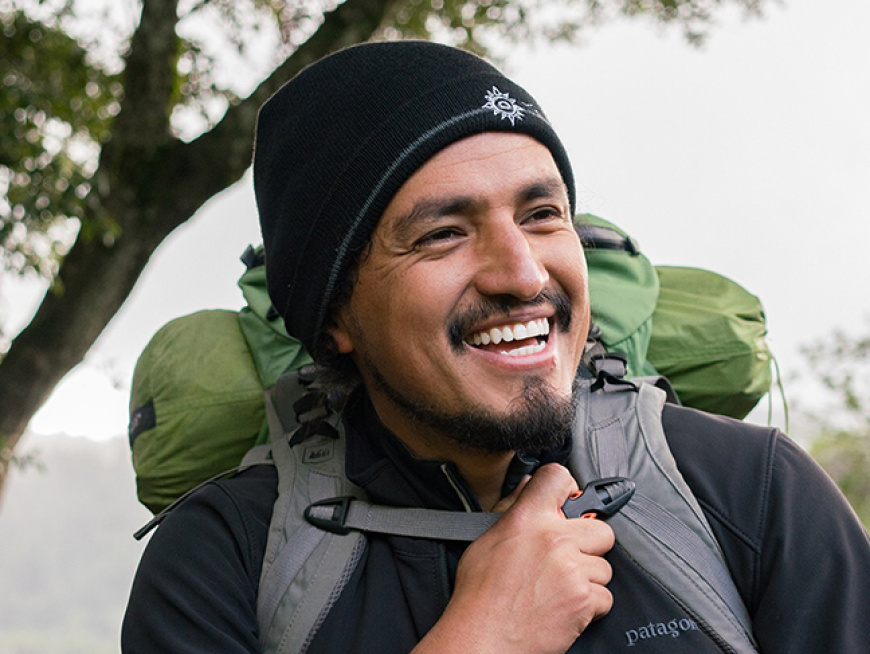 University of Michigan School for Environment and Sustainability (SEAS) alumnus José González (MS ’09) has kept close ties with his alma mater for more than a decade, returning to speak at notable events and forums honoring—and celebrating—diversity, equity and inclusion. In 2016, he was commended by President Barack Obama at the White House for his work with Latino Outdoors, the organization González founded in 2013 to “inspire, connect and engage Latino communities to embrace meaningful outdoor experiences as part of their culture—and where they can enjoy nature as a safe, inclusive and welcoming place.”

Over the years, González’ work has earned numerous awards and recognition. The most recent, the Aquarium of the Pacific 2022 Heritage Award, was presented to Latino Outdoors in honor of the organization’s commitment to inclusion, making nature accessible and empowering community members while celebrating their important cultural connections to the environment. González accepted the award on behalf of the organization at the 21st annual Baja Splash Cultural Festival in Long Beach, California.

“The Aquarium of the Pacific’s cultural festival has quite a bit of history,” said González. “And to incorporate the Heritage Award is saying that they want to recognize and honor people who are contributing to the work that they do. For us to receive the award also corrects a common misconception that Latino Outdoors is strictly a land-based organization.”

As an experienced educator, environmental education advisor, outdoor education coordinator and illustrator, González continues to explore many pathways. He spoke about his work since he transitioned out of his role as the founding executive director of Latino Outdoors in 2017.

“That was exciting,” said González, “because that transition was an invitation to ask how we can continue to grow and nurture the organization—as well as the movement impact of the organization.”

González noted that he still contributes to the community building and movement work that is inclusive of Latino Outdoors—as well as the practice of being in solidarity with other affinity communities, and the larger work of equity, inclusion and justice-oriented programming.

His efforts are primarily focused in three areas.

The first, which González describes as his “paid work,” includes speaking engagements along with workshop development and facilitation. He also works with outdoor industry brands, as well as conservation, environmental and nature-based organizations.

“My work with these organizations is with equity in mind,” said González. “I’m asking them to consider how to build inclusive practices—and to assess their programmatic elements for diversity.”

The second area of his work—though it doesn’t draw an income—is substantial, said González. It is split between leadership and volunteering roles, and includes serving on several boards, such as the National Outdoor Leadership School, the National Recreation Foundation and the Outdoor Industry Association.

The third area of special importance to González is making himself available in service to student groups and community grassroots organizations that don't have the budget for advisory assistance.

“I remember what it was like to be in those shoes,” said González. “So, I'm trying to answer the question, ‘How can I be who I needed 10 years ago?’ That’s my way to ensure that once I'm good and done, there will be others like me continuing this work—because I became exactly who I needed back then.”

González spoke about his appreciation for members of the SEAS community—many of whom are now his colleagues in the field.

“I have both aspiration and gratitude,” said González. “I have a lot of gratitude for the SEAS community, and for so many who have gone on to have such a wide range of impact. I see all our work as connected, even though we are focused in different ways. My gratitude is an acknowledgment to all of them, to those who may be clearly seen and to those who are not.

“The aspiration is knowing that the work we do references deeper ideas in the social ecosystem in service to justice, equity, inclusion and diversity. We all have roles that contribute in unique ways. Some may be disrupters, and others may be storytellers. Some may be visionaries, while others may be healers.”

González also shared some insights about the challenges of environmental justice work, while offering some inspiration—and appreciation—to those who are “fighting the fight.”

“I know this work is not easy because it's not a question of ‘if’ but ‘when’ we're going to make mistakes and stumble,” said González. “Those working in environmental justice know that it's a hard space to be in. Those who do policy work know that it's an easy role to misunderstand.

“At times, we might ask ourselves: ‘What am I doing? Is it enough in the overall picture to fight climate change, to fight systemic oppression, to undo legacies of harm?’

“I'd like to think that we are. We are holding the perpendicular emotions of grief and gratitude—and not giving into hopelessness in the scope and scale of how big some of the problems are. So, I just want to offer my gratitude and respect, both to the SEAS community and to all my colleagues who are ‘fighting the fight’ in all of these different spaces.”