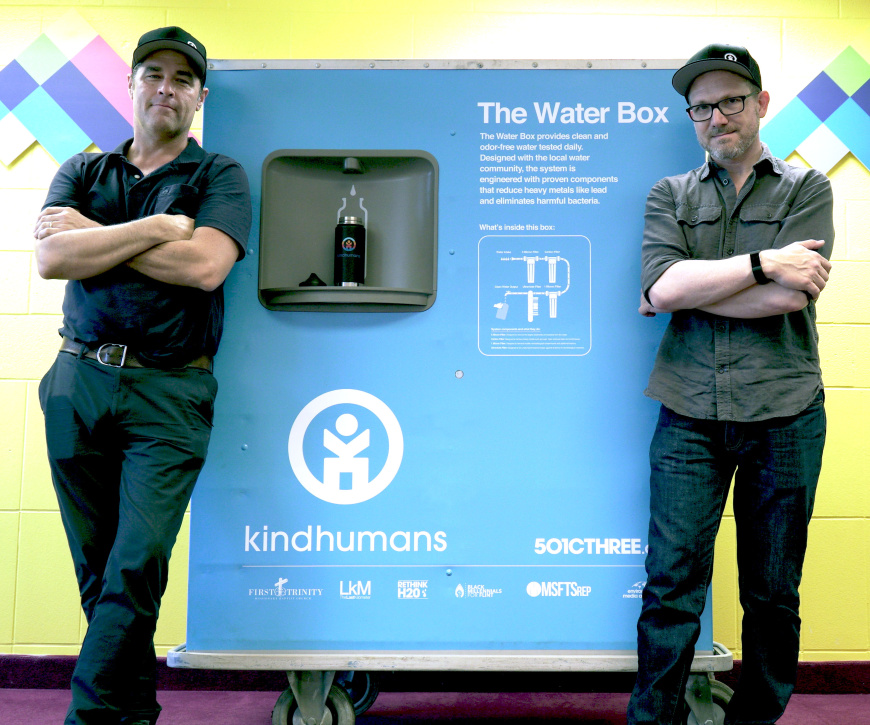 When an emergency causes a disruption in access to clean water, it seems reasonable to respond by providing the public with bottled water. In the short term, this can provide a safe supply of water while the problems get sorted out. But what if the emergency has lasted eight years, and counting, as it has in Flint, Michigan? According to Jaron Rothkop, a U-M School for Environment and Sustainability (SEAS) graduate student specializing in Behavior, Education and Communication (BEC), it was a request for additional bottled water from Flint in 2018 that jumpstarted a quest for a more sustainable solution.

The water crisis that Flint continues to face today, in 2022, began in 2014 when the supply source was changed from the Detroit-supplied Lake Huron water to the Flint River. This switch caused pipes to corrode and leach lead and other contaminants into the drinking water. Years on, the media and government officials are mostly quiet about the ongoing crisis in Flint, which is likely why the founders of JUST Water, the organization that received the request for bottled water in 2018, were shocked to find out that the citizens of Flint were still struggling to access clean water.

At that time, the JUST Water team, founded by Drew FitzGerald and rapper Jaden Smith, was actively working to find more environmentally sustainable ways of packaging and extracting water. But when the reality of the ongoing crisis in Flint came before them, FitzGerald and Smith teamed up with Rothkop to explore alternatives to sending millions of single-use bottles of water to Flint.

Rothkop, who had founded a solar microgrid company that brought clean energy and water to developing countries, was already up to speed on technologies involved in water filtration. When the JUST Water team approached him, he thought, why not use these same technologies in Flint? “I had been traveling around the world working on water and energy problems, but here was one right in my backyard where I could make a difference,” says Rothkop.

The trio got started by sitting down with the leaders of the First Trinity Missionary Baptist Church of Flint, who had been distributing bottled water to about 200 families per day since 2014, to find a way to filter and distribute water in a more cost-efficient and sustainable manner. At that point, cars were still lining up around the block waiting for hours and hoping to reach the front of the line before the bottled water ran out. Over the next 6 months, with support from U-M Flint and the Mott Foundation, they would collaborate on a prototype system. Their efforts resulted in the creation of a filtration system that uses activated carbon to remove lead and ultraviolet rays to remove pathogens. The system was intentionally created in a way that is easy to operate and maintain. They containerized it and named it The Water Box. At the start of 2019, the church took this box and started distributing clean water in large, reusable plastic jugs in place of small bottles of water.

The Water Box, which can filter 10 gallons of water every 60 seconds, was a success. Not only was it a more environmentally friendly solution, but it also eliminated the significant logistical challenges that went into distributing bottled water from the church parking lot. “For all these years, the church had been renting forklifts and 18-wheelers to move and distribute millions of bottles of water. They were putting a lot of time and effort into getting the water there first and then distributing it,” says Rothkop. “So not only did we eliminate the burden and cost of all those complicated logistics, but we also reduced the stream of single waste plastics with a system that never runs out of water and is simple enough that a community organization can operate, maintain and maybe even build themselves.”

As news of the Water Box spread, other organizations in cities facing water crises began to express interest, so the team rose to the challenge and started building more Water Boxes. Today, there are 26 Water Boxes in cities around the country that have endemic water problems—primarily Newark, New Jersey; Jackson, Mississippi; and Los Angeles, California. They have also reached communities in Puerto Rico, the Northern Cheyenne Indian Reservation in Montana, St. Louis, Missouri, and Benton Harbor, Michigan.

It’s not uncommon for communities with endemic water problems to have difficulty trusting the officials who are responsible for supplying them with safe water. “People in these communities suffer from chronic disinvestment and have no idea when their water will be safe to drink. In addition, because they have been neglected and lied to, they don’t trust that their water will ever be safe again,” says Rothkop. This is why the Water Box team has continued to emphasize the importance of collaborating with local organizations that can communicate directly to their community that the water from the Water Box is clean and safe to use. “A big part of the program is to work with community organizations who are trusted voices so that they are the ones assuring their community that the water is safe to drink. So, each Water Box is community tested and community reported,” says Rothkop.

Realizing the power of this type of community connection when implementing programs is one of the reasons why Rothkop decided to pursue a graduate degree at SEAS specializing in BEC. He has experienced first-hand the gap between scientific progress and the engagement, outreach and communication needed to effectively implement new technologies. “The biggest gaps are in how science engages with communities, not the technologies themselves. Every program that I’ve been involved with that didn’t succeed wasn’t a failure due to the technology, but because the programming didn’t consider people and their needs and the long-term involvement in the sustainability of the project,” says Rothkop. “Seeing this was a big reason why I decided to specialize in BEC. I wanted a better understanding of what the frameworks and models are so I can effectively employ them in all my projects.”

Rothkop is currently in his second year of graduate school, although, considering all the organizations he is running and launching, he expects his second year to last longer than a year. Reflecting on what he’s learned thus far, he says that it’s well worth his while to pursue a master’s degree, explaining, “I have been doing this work without a formal education or framework in research, and in coming to SEAS I’m really benefiting from understanding the body of work that’s out there that supports this kind of impact in programming,” says Rothkop. “The coursework on localization with Professor Raymond De Young, in particular, has had a huge impact on me. In his classes, he reinforces the benefits of localization and human-scale, community-led adaptation to climate change, with many principles that line up with how we’re doing things with the Water Box. I’m also interested in bringing all that I’ve learned in his classes to Ann Arbor as our community works toward achieving community-wide carbon neutrality by 2030.”

What’s next for the Water Box project? A long-term goal for the program, which operates as part of 501CTHREE, is to make available an open-source design that community organizations can use to build and maintain their own Water Box. Rothkop and his team understand that this program is a contingency solution, it’s not meant to be permanent, but they also recognize the importance of addressing the near-term issue of how people in struggling communities get clean water. “Access to clean water is a human right,” says Rothkop. “One of the reasons I got involved with water is because of the environmental justice dimension—in North America, BIPOC communities are most likely to suffer from the adverse health effects of contaminated water. My hope for this project is that it contributes to the resiliency and self-sufficiency of the people it serves.”