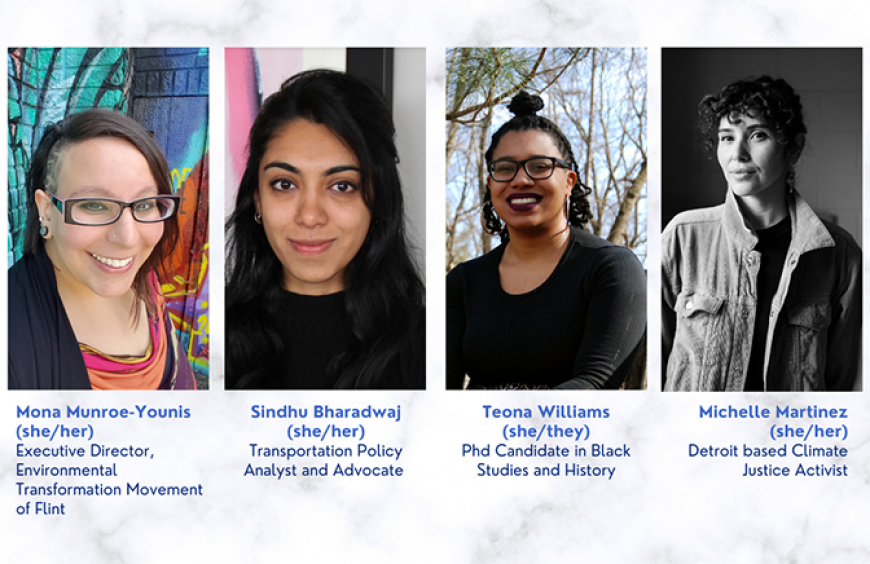 A panel of U-M School for Environment and Sustainability (SEAS) alumnae who work in the Environmental Justice field spoke to SEAS students about their experiences in advancing equitable environmental change. The panelists discussed federal recognition of environmental justice, how to advocate within a professional setting, and how they’ve navigated their BIPOC (Black, Indigenous, and People of Color) identities in their chosen roles.

“The conservation field needs advocates in order to advance equitable environmental quality for all, especially given the disproportionate impact that BIPOC communities face with air, water, and land environmental quality,” said Mona Munroe-Younis (BS ’06, MS ’11), Executive Director of the Environmental Transformation Movement of Flint and a state-appointed member of the Michigan Advisory Council for Environmental Justice. “I see myself as not a typical city employee, but as an advocate for the people. You're going to make some choices, whatever field you go into, about how much advocacy you are going to bring to it. It takes effort within institutions to be that person, but it's very rewarding, and I feel like you end up living your values better.”

“Power structures of oppression impact people in different ways,” added Michelle Martinez (MS ’08), a founding member and Exiting Executive Director of the Michigan Environmental Justice Coalition. “Self reflecting about what you want your role in the environmental justice movement to be is super important, and it’s a huge privilege to even be thinking about it."

She continued: "Being a Detroiter is really important to me and my identity, and how it relates to social change work and structural and systemic justice. It has been a big journey for me personally to try to figure out how to hold your own identity within fixed institutions, and how to hold your identity in opposition to mainstream society that continues to marginalize Indigenous peoples and negate immigrant experiences, both in media and through implicit biases. To be able to identify your own implicit biases and to leverage your own passions and how you want your identity to be a part of your work—navigating that is important to your personal well-being.”

Teona Williams (MS ’17), a doctoral candidate at Yale University in History and African American Studies who focuses on Black feminists’ influence and their central role within the environmental movement, addressed current environmental justice initiatives they’re working on. “For me, what is most inspiring about the direction of environmental justice is its shift to even more radical directions. I have the honor of being part of a wonderful group of scholars and activists who are thinking deeply about the intersections between environmental justice and mass incarceration and police brutality,” she said. “We have to keep turning our attention to the most marginalized in society, because if we focus our policy on the most marginalized, we are, as a result, helping everyone. I learned that from Fannie Lou Hamer, June Jordan, and all of the Black feminist environmentalists before me, and it's really exciting to see that being amplified.”

On navigating identity within academia, Williams noted that “as an undergrad, I tried to play that game of denying that I am a poor Black woman from a historically disparaged neighborhood. It never brought me joy or happiness to suppress this part of my identity, so now I refuse to do it. I have to be myself. Now that I’m navigating the job market, I have a mantra I've been telling myself: People are going to have to hire me, they're going to have to tenure me. They're going to have to feel like I'm somebody they can work, support, and collaborate with. It's best that they see who I am now, and I see who they are now, before I enter spaces where I have to perform an identity they want to see instead of expressing all of these amazing things that make up my identity.”