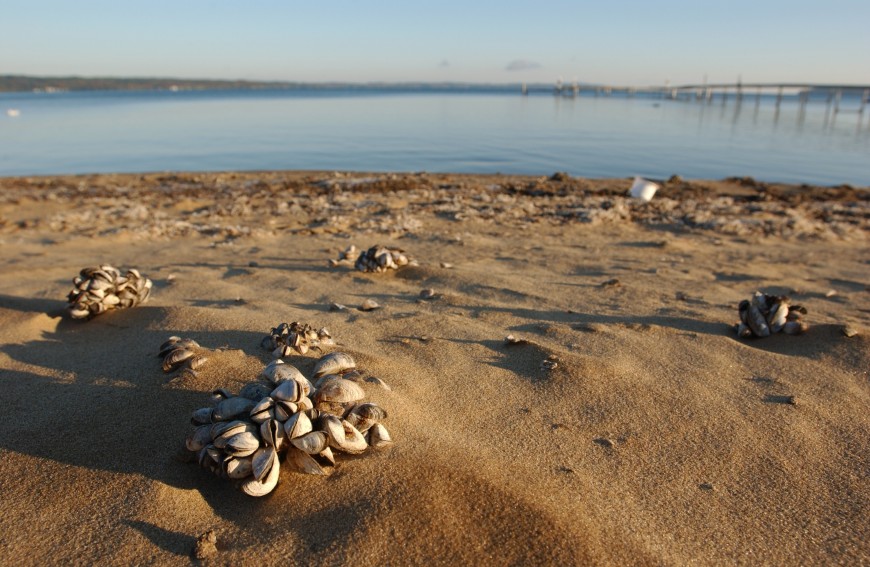 The introduction of zebra mussels and the closely related quagga mussel to the Great Lakes changed everything. Beaches are now covered with shells, algae, and dead birds and fish wash up on the shoreline from botulism outbreaks. Those highly visible impacts divert our attention from other changes in the Great Lakes that are more evident in offshore waters.

In the depths of Lake Michigan, a small shrimp-like animal, the half-inch-long Diporeia, used to be the most abundant animal living in the bottom of the lake—averaging more than 7,000 animals per square meter. Diporeia was a keystone species, serving as the critical link between the microscopic algae they ate and the renowned Great Lakes fisheries they fed. Diporeia are nearly gone now, and their loss led to the collapse of the Great Lakes food web.

A recent paper in the Journal of Great Lakes Research by SEAS alumnus Mark Edlund (MS '92, PhD '98) of the Science Museum of Minnesota and colleagues David Jude and Tom Nalepa of the University of Michigan provides new clues as to why this happened. The team used a novel combination of diet analysis of historical Diporeia collections made in the 1980s through 2000s paired with analysis of sediment cores over the same time period to test how food resources and diets changed during the zebra and quagga mussel invasion.

The answer was clear based on Edlund’s diet analysis: Pre-invasion Diporeia fed almost exclusively on three types of microscopic diatom algae known for their high lipid content and abundance in spring and early summer. During the mussel invasion, Diporeia was forced to shift its diet to smaller and much less nutritious diatom species, resulting in its eventual demise as young Diporeia were unable to survive to adulthood.

A comparison of those diets with the sediment record revealed additional telling evidence. It confirmed that Diporeia had a highly selective diet; Diporeia wanted to eat only the choicest diatom morsels that sank to the bottom of the lake. However, the research team also showed that the change in food resources had started before the mussel invasion. Point source phosphorus control measures started in the late 1970s and 80s had already begun to limit algae growth in Lake Michigan.

Zebra and quagga mussels sped up that process, rapidly shifting how nutrients and energy are cycled and distributed in the lake, leading to dramatic changes in seasonality and abundance of those important and favored diatom food sources for Diporeia.

Reprinted with permission from the Science Museum of Minnesota.

Read the paper: "Diets of the benthic amphipod Diporeia in southern Lake Michigan before and after the dreissenid invasion"