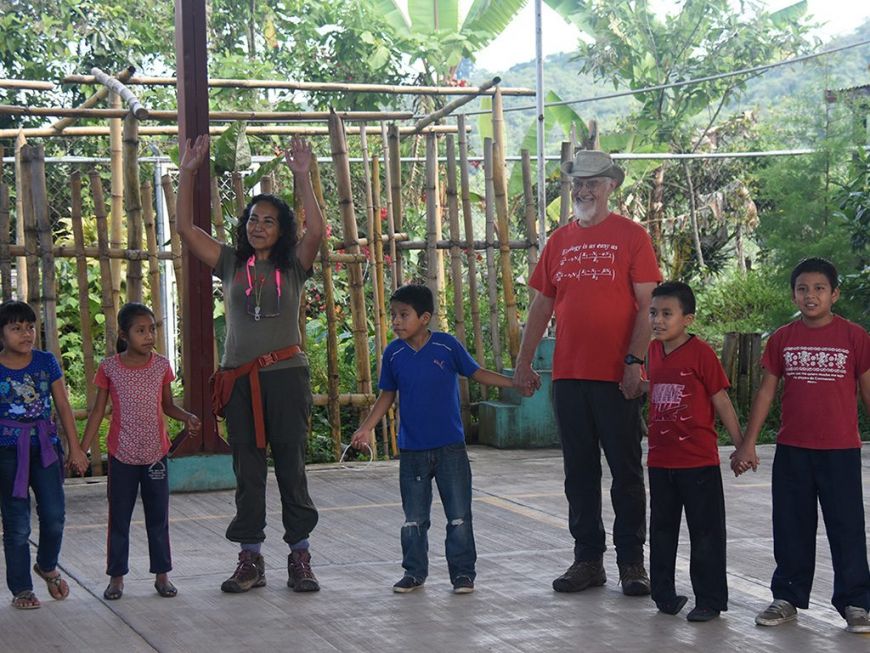 EcoDía is an educational outreach event developed each year since 2017 for the primary school students at the Finca Irlanda school (on the coffee farm where the labs of Professors John Vandermeer and Ivette Perfecto conduct their research). While it’s a little bit different every year, typically they develop activities related to particular themes having to do with ecology, biology or other scientific fields. The hands-on activities range from games to outdoor exploration to model demonstrations. Each year there are a handful of different stations that the students rotate between in groups. There have been ecology stations on decomposition, pollination and food webs, and more general stations on physics, chemistry and geology, to name a few. Once all groups have rotated through each station, they get together to share what everyone learned. After the activities, they finish what is usually a very enriching but exhausting morning with a delicious lunch that a few of the local community members help prepare for everyone at the school.

They were planning an EcoDía this year in early June, but with the covid crisis and the cancelation of their summer field season, it seemed inevitable that they would also cancel EcoDía this year. However, they recently decided to take the opportunity to develop some material from a distance, so they put together an educational activity booklet about COVID-19 that makes the pandemic accessible to kids, educates them on sanitation and safety measures, and includes a little bit of microbiology and disease ecology. Everything is shut down on the farm, so because they imagined many of the kids may be bored at home, they wanted to give them a fun way to learn on their own and share with their family members.

Each year, a group from the Perfecto and Vandermeer labs, along with Kristel Sánchez (EEB), a few others from Stacy Philpott’s lab at UC Santa Cruz, and several research technicians that work with their group, help to organize the activities and coordinate them the day of the event. From the community of farm workers at Finca Irlanda, there are usually around 40 to 50 school children that participate each year ranging from preschool to 6th grade. Some of the teachers and school coordinators also help to chaperone the groups. EEB graduate student Chatura Vaidya colors with the children. EEB graduate student Chatura Vaidya colors with the children.

The school is located in Finca Irlanda, a 300-hectare coffee farm located in the Soconusco region of Chiapas, Mexico about 40 km north of Tapachula near the Guatemalan border. They typically hold Ecodía sometime during the first half of June when their full team is there to help with the activities and before the school’s graduation in July.

The rest of this article takes on a question and answer format between Jonno Morris, a doctoral student in the University of Michigan School for Environment and Sustainability and EEB communications, and then with Sara Donají González Herrera, the operational director of the Peters Foundation Educational Center in Mexico:

What inspired these events?
In the fall of 2016, I had the opportunity to stay at Finca Irlanda for an extended period of time by myself. When I wasn’t doing field or lab work, I spent a lot of time socializing with people in the community. Unfortunately, resources for public education are fairly limited in rural agricultural communities in the region and schools are often not well supported by the government. At the time, most of the teachers were volunteers and there was a pretty quick turnover rate, which can be disruptive for students. I started thinking that, in addition to our research, there might be an opportunity for our group to engage a little bit more with the community and to put our experience as educators to work. After chatting with some other members in my lab and thinking back to my experiences volunteering for the BioBlitz at D-Town Farm in Detroit, we came up with the idea of EcoDía. EEB graduate student Nicholas Medina in the learning circle. EEB graduate student Nicholas Medina in the learning circle.

What are you hoping the children and others get out of it?
For me the goal of EcoDía is two-fold. First, it is an excellent opportunity for our group to engage and connect with the community on the farm. This builds trust and allows community members to learn more about who we are and why we are there. It also pushes students in our lab group to think beyond the data they are collecting and to consider the agroecosystem as a whole, people and all. It forces us, as researchers, to humanize the impact of the agricultural systems that we study and not just conceptualize them as academic abstractions. The second aim is to provide a novel educational experience for the kids and to get them excited about science, nature and conservation. Of course, since most of the farm workers spend their days in the field, many of the children already know the system and many of the organisms better than us scientists, but EcoDía offers the chance to see all of that from a different perspective. They might have already seen Azteca ants, for example, but maybe they don’t know about their role in controlling pests or haven’t thought about why these populations fluctuate throughout the year. Ideally, the activities in EcoDía raise awareness of the role of nature in their family’s livelihoods and inspire the school kids to help conserve it. Maybe some will even aspire to study biology further in secondary school and beyond. Children working on a project in a classroom.

What have these events taught you and the other volunteers?
One of the most immediate lessons has been just how challenging it is to develop engaging educational activities for 40+ elementary school children every year! The whole process has given me tremendous respect for the work that the actual teachers at the school have to do on a daily basis and for the role of primary school educators more generally. While I get a lot of joy from participating in EcoDía every year, I don’t think I would have the stamina to do it year-round. It’s telling that most of us feel substantially more exhausted at the end of EcoDía each year than we do after a full day of fieldwork hiking up and down the slopes of the coffee farm. Another really rewarding aspect is learning from the students themselves about the system on the coffee farm. Because many of the children spend their days playing in the farm fields, they often know more about the organisms than we do. I remember during our first EcoDía when a group of students all shouted “¡Chichihueta!” in excitement when I showed them a caterpillar during one of the activities. Not only did they all immediately know its common name, but they shared that it can actually be eaten and is part of the local diet for many in the community!

What are some comments you've heard generally from children, teachers, volunteers?
According to the school director and some of the parents, the kids now ask when the next EcoDía will be all the time. Especially when those of us from our group first arrive in the early summer, that seems to signal to them that EcoDía will soon be coming, which is really exciting. I have also heard that students will often use the internet on the school computers to look up the scientific name of some of the organisms they have learned about during EcoDía. Perhaps most rewarding is when one of the kids during an EcoDía activity remembers something that they learned previously during EcoDía from the year before.

Sara Donají González Herrera is the operational director of the Peters' Foundation. The school in Finca Irlanda is the Peters Foundation Educational Center. She kindly responded to these questions:

What do the students gain from the experience of participating in EcoDía?
Children are full of energy and always ready to participate in EcoDía. They are excited to see new science experiments every time. They especially like to manipulate small bugs and animals, they also love to try new gadgets such as tweezers, test tubes, butterfly nets and microscopes. The older children (10 to 12 years old) can share more about what they know about nature and their environment, young children embrace the experience and are happy to do new things.

Do you recall any general comments from the students during or after the activities that you can share?
I remember children were excited to see how the biologists caught a snake and they were not afraid. They also love drawing animals and they shared their art work with the biologists.

The Vandermeer and Perfecto labs have been conducting research at Finca Irlanda, an organic coffee farm in Chiapas, Mexico, for over 20 years. They make a point of engaging with the local communities. Other students involved in the research and in organizing and taking part in EcoDia for 2019-2020 include: Hagan Capnerhurst, Gordon Fitch, Donald Gloede, Zachary Hajian-Forooshani, Estelí Jiménez-Soto, Nicholas Medina, Beatriz Otero, Iris Rivera Salinas, Kristel Sánchez, Lauren Schmitt, Chenyang Su, Chatura Vaidya.

This article originally appeared on the U-M College of Literature, Science, and the Arts' Ecology and Evolutionary Biology website.