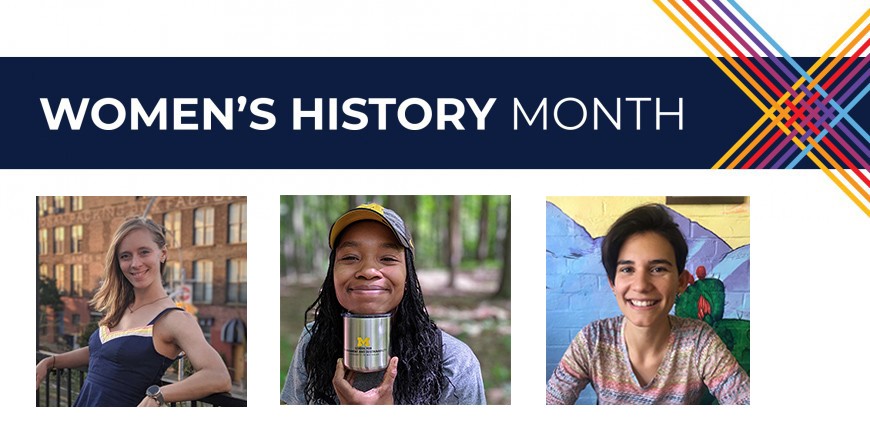 In celebration of Women’s History Month, we asked the women in the SEAS Student Government to share their insights and experiences. We greatly appreciate the contributions of incoming President Kat Cameron, Alumni Chair Seneca Lee, and current President, Anna Urso.

We also invite you to explore more of our series, Women’s History Month: Perspectives from SEAS Women in Sustainability. We'll be adding more "Voices"  and stories throughout the month.

Kat Cameron graduated from the University of Wisconsin - Madison with degrees in Biological Aspects of Conservation, Environmental Studies, and Dance. After which, she pursued a career in filmmaking in New York City. She, however, realized she wanted to have a greater impact than skin care commercials, and spurred by the shut down of the film industry due to the pandemic, she enrolled at the University of Michigan to study Environmental Policy and Planning.  Interested in climate adaptation, her masters project focuses on helping Great Lakes cities implement resiliency measures.

I fell in love with bats when I was in middle school. They're true underdogs: amazing winged creatures that are so misunderstood. I should thank the Carlsbad Caverns Park Ranger that gave the Bat Flight talk that night because it sparked inside me a need to protect and fight for bats. However, right now, our planet is the underdog, and that's who I'm fighting for.

Harvard Public Health did a study that revealed that elderly patients are more likely to live longer when they have female doctors. The study didn't provide an answer to why, but it pointed to other research that female doctors are more likely to use evidence-based medicine and are better at communication. Women are naturally empathetic, which I think helps us to humanize the climate crisis and justify our need for greater action. Especially with the focus on ensuring that equity and justice are a part of how we address climate and environmental problems, being able to listen to the needs of people and make decisions that are the best option for everyone, is why it is vital for women to be at the forefront of these movements.

After my time in film, where I experienced harassment and men that would question my abilities as a female lighting technician, gender barriers in academia feel like a molehill compared to that mountain. I know however that many women feel as if their voices are silenced or ignored and we struggle to overcome gendered expectations of how to act and what is acceptable. I was not one of the first female lighting technicians, nor the first woman to pursue a masters degree, but each one of us continues to pave the way towards a future without barriers.

I left the world of film and television, where I helped tell uninspiring love stories and made courtroom dramas, to go to grad school in the hopes of changing people's real life stories. Currently, I want to pursue a career in guiding communities to shift their narrative in the face of climate change through climate adaptation and resiliency planning.

Seneca (Sen) Lee is a Smith College graduate with a bachelor’s degree in Biology. After Smith, she moved to New York City, and after working in the city for three years, discovered that she wanted to be an environmentalist specializing in urban agriculture working with community members and engaging youth education programs related to growing their own food. At U-M, she is studying the effects of biochar, a soil amendment, on soil health and quality to determine if it can be an approach to improve degraded urban soils. In her free time, during COVID-19, she enjoys being outside, watching animals, talking to her friends and family, and exercising when she can.

While living in New York City, I spent time as an environmental educator and learned quite a bit about urban ecology and soils. This was a bit different from my experiences growing up where I had access to wooded areas, backyard gardens, and small ponds, all within one city. Urban systems are not known to be rich and full of diversity but through teaching experiences, I learned that the urban environment can provide plenty for a variety of living things. With that, I became increasingly interested and passionate about learning ways to conserve the ecology of such environments. This comes with acknowledging and recognizing the environmental harm placed on many urban communities, which typically have higher populations of communities of color, and committing to doing and supporting work with an equitable and just lens.

My gut tells me yes and simply for the fact that many women often take on the role of caretaker, caregiver, matriarch, essentially the one who takes care of those who need to be cared for. There is almost an innate-ness in many women to take on this role of taking care and so I think that is important to bring into the sustainability conversation. This of course cannot and does not apply to all woman-identifying people, but generally, this may help ensure that many voices are being brought into the conversation and included so that sustainability knowledge and practices can be reached by all groups of people.

Yes, especially as a Black woman. I am fully aware that I have to speak more confidently than my peers, I have to present stronger arguments than my peers, and that my voice will often be overlooked. This is something I learned I have to pick my battles with. There will be times in which I will demand my gender identity be ignored and there will be other times where I will have to accept that loss. The more we women speak up, the less we will have to accept being silenced as time goes on (in an ideal world).

My career interests primarily lie in giving back to BIPOC communities, particularly Black communities, in the form of agricultural education and resources. I anticipate creating or joining an urban farm that is viewed as a resource for the community to ensure those who do not have access to healthy foods via corporate businesses can in fact obtain healthy foods. I hope to teach youth in urban areas about urban farming/community gardening creating a sense of empowerment in sourcing, tending, and eating nutritious foods they grew themselves.

Anna Urso studied environmental geoscience and music performance at DePauw University in Indiana. After moving to Tucson, she completed a masters in viola performance at the University of Arizona while working on NASA's HiRISE mission, imaging the surface of Mars. Anna returned to her home state of Michigan to join a Great Lakes coastal wetlands project at The Nature Conservancy before attending graduate school at the University of Michigan School for Environment and Sustainability. Her current masters research explores the intersection of conservation efforts and environmental justice on Tohono O'odham lands along the US-Mexico border and in community conservancies in Laikipia, Kenya.

My interest in the field of sustainability grew out of a sense of family and community fostered by multiple generations of women. I grew up gardening with one grandmother and packing Meals on Wheels with the other. Adding to this my mother’s passion for understanding environmental impacts on human health, it makes sense that I chose to pursue a bachelor’s degree in environmental geoscience. My first professional experience in the field was researching public health risks associated with asbestos led by Dr. Brenda Buck at the University of Nevada, Las Vegas. She faced intense scrutiny and suppression of research by the state after challenging a multimillion-dollar construction project that would put the public at risk.

It comes as no surprise to me that my relationship with the environment was predominantly shaped by the women in my life. Women and non-binary persons around the world have historically been the primary environmental stewards and keepers of environmental knowledge for their communities. This knowledge is intricately linked with sustaining life and its legacy carries on in women-led movements like Black Lives Matter. Feminist perspectives challenge the patriarchal structures of colonialism and racial capitalism that drive environmental degradation and climate change.

My obstacles in academia come at the intersection of gender and ability. As a dyslexic woman, I was not expected to outshine my peers, particularly male peers, in the eyes of my instructors. For many years, the gendered pressure to behave in class masked the explosive frustration I revealed at home while struggling to fit into an educational system that was not built for me. It was not until undergraduate school that I received the much needed support and resources that have allowed me to excel both academically and as a student leader today. The way that gender plays out across race, class, and ability is integral to providing equitable opportunities in education.

My career interests lie at the intersection of environmental justice and ecological restoration. Through community engagement and coalition building, I hope to advance equitable environmental action that builds a future filled with healthy, thriving communities and ecosystems. My dream job would be coordinating restoration efforts in partnership with Indigenous communities.