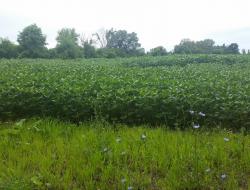 The variety of habitats likely supports a diversity of wildlife, including fish, herps, waterfowl, ground-nesting and song birds, and mammals.

Soil:  There are well-drained loamy sands and muck soils located in the marsh and low areas to the north and west of the lake.

Topography:  The elevation on this site ranges from 848-890 feet above sea level. The most significant slopes occur north and northwest of the lake. These slopes are long and range from 18-25%, most other slopes are between 2 and 12%. 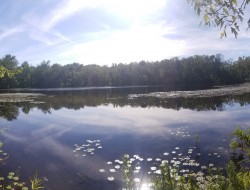 Newcomb Tract includes a large variety of habits within a relatively small area, including shoreline along the Huron River and Bass lake (approximately 5,000 linear feet), a small 3-acre lake surrounded by forested property, about 50 acres of hardwood forest with different management history, 51 acres of old fields, and 10 acres of open areas surrounding the farmhouse.

Topography:  Elevation at the site ranges from 860-1010 feet above sea level, creating a rolling topography with moderate to steep slopes. Surface water includes the one unnamed approx. 3-acre lake within the property. 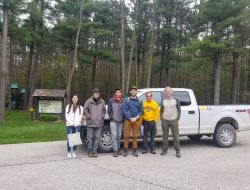 Ringwood Forest is surrounded mostly by wooded and agricultural land. The forest within the property includes young and old plantations of confers and hardwoods, second-growth hardwoods stands, and both upland and floodplain forests. The conifers in the red and white pine plantations and “Historic Spruce Alley” (Norway spruce) planted in the late 1800s are of historical significance—they are thought to be some of the oldest plantations in the state. Other species found in upland areas include Chamaecyparis thyoides, Larix laricina, Pinus banksiana, Populus temuloides, Pseudotsuga menziessi, and Robinia pseudoacacia.  Bottomland species include Acer rubrum, Fraxinus nigra, Populus deltoids and Quercus bicolor.

The South Fork of Bad River flows over 3,300 feet through the forest and is between 30-50 feet wide. The Bad River is a 44.3-mile-long river that begins in Gratiot County and empties into the Shiawassee River in Saginaw County within the bounds of the Shiawassee National Wildlife Refuge. The Bad River watershed is almost 90% agricultural and is a part of sediment reduction programs to ultimately protect the Saginaw Bay and Lake Huron.

Soil:  The soil type ranges from well-drained sands on the ridges and upland areas, to more poorly drained loamy and clay loams in the flood plain. A majority of the site is poorly drained.

Topography:  Ringwood Forest is slightly rolling with an elevation change of about 20 feet throughout the site. The greatest slopes are found on the flood plain and range from 10-25%.  Forty percent of the site is within the flood plain. 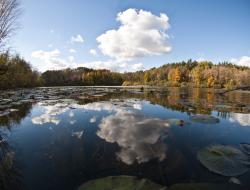 Saginaw Forest’s primary features are forested areas and a 10-acre lake. The property is surrounded on three sides by old farm fields, sub-divisions and commercial developments. The interior is a diverse assemblage of deciduous hardwood stands (14 acres) and approximately 33 acres of conifer plantations of pines, firs and spruce, largely succeeding into a maple forest. To the northwest of the site is also an Arboretum. Saginaw Forest is one of only 2 known sites in the world of the rare Murray’s Birch (Betula murryana), discovered and named by U of M forest ecologist Burt Barnes (Barnes and Dancik 1985).

Third Sister Lake is 3.8 ha kettle lake of glacial origin (one of 3 similar lakes in the area) that nearly bisects the northern end of the property and has a fish community including bluegill and pumpkinseed sunfish and large-mouth bass. Lake and groundwater dioxane contamination from the Gelman Corporation was discovered in the 1980s and annual monitoring now occurs, showing decreased levels.

The lake is bordered by a marsh on the eastern edge, which is composed of invasive common reed (Phragmites), soft maple, willow and aspen.  The western edge empties into a peat bog bordering the property. The marsh in this area is composed primarily of native cattails, invasive reed canary grass and a mixture of soft maple and elm. Both marshes are semi-permanently flooded.

Just 75m south of the lake is a large pond bordered by white cedar and invasive buckthorn on the northern edges and a mesic oak–hickory forest with interspersed historical plantings of other species including Norway maple, spruce, and red pine on the southern edge. The green ash trees that once bordered the western edge are now dead. Three species of turtles, painted, Blanding’s and snapping are seasonal inhabitants of the pond. The pond is also a breeding habitat for five species of amphibians including, wood frogs, green frogs, spring peepers, gray tree frogs and chorus frogs. Grass frogs and American toads also occasionally reproduce in the pond. The mixed hardwood forest south of the pond serves as the terrestrial habitat for these amphibians.

A seasonal stream flows through a Douglas fir and oak-hickory forest into Third Sister Lake on the eastern edge of the property. This stream has an unconsolidated bottom of cobble-gravel and organic matter and serves as an important habitat, particularly during dry years, for juvenile and adult frogs. The northwestern corner of the property contains seasonally flooded forested wetland of broad-leaved deciduous trees.  Two ephemeral ponds, with breeding populations of wood frogs, spring peepers and gray tree frogs border the northern property line.

Topography:  Most of the site consists of level to gentle slopes with a few steep slopes. In recent years, erosion has been occurring, particularly during large storm events, creating an incised creek situation with water flowing from development to the east and south toward Third Sister Lake. 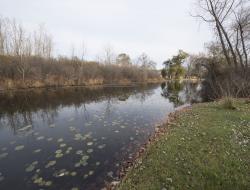 Open water and low marsh vegetation. As the only undeveloped shoreline on Bass Lake, the wetland provides a valuable ecosystem in terms of water quality and wildlife habitat. The majority of St. Pierre wetland is covered with low marsh vegetation (cattail, sedge, etc.). Tree and shrub species found on the site include aspen (Populus tremuloides), willow (Salix sp.), silver maple (Acer saccharinum), and red-ozier dogwood (Cornus sericea). There are also several areas of open water in characteristic of a cattail marsh.

Soil:  The soil type found in St. Pierre Wetland is Houghton Muck. It is poorly drained, organic, oxidizes readily and has a high water table.

Topography:  This site has an elevation of 853 feet above sea level and is nearly flat. The wetland drains to the south, into Bass Lake. 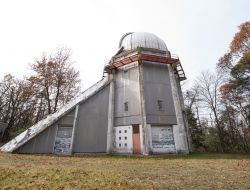 Soil:  Major soil types found on the site include:

Topography:  Elevations range from 880 to 1058 feet above sea level (the top of Peach Mountain, the highest point in SE Michigan).  The variable elevation creates slopes which average 30 degrees for a 200 foot run. The topography reflects the effects of glaciation, including kames, moraines, and outwash areas. There is no surface water (lakes or streams) due to naturally draining topography and well drained soils.