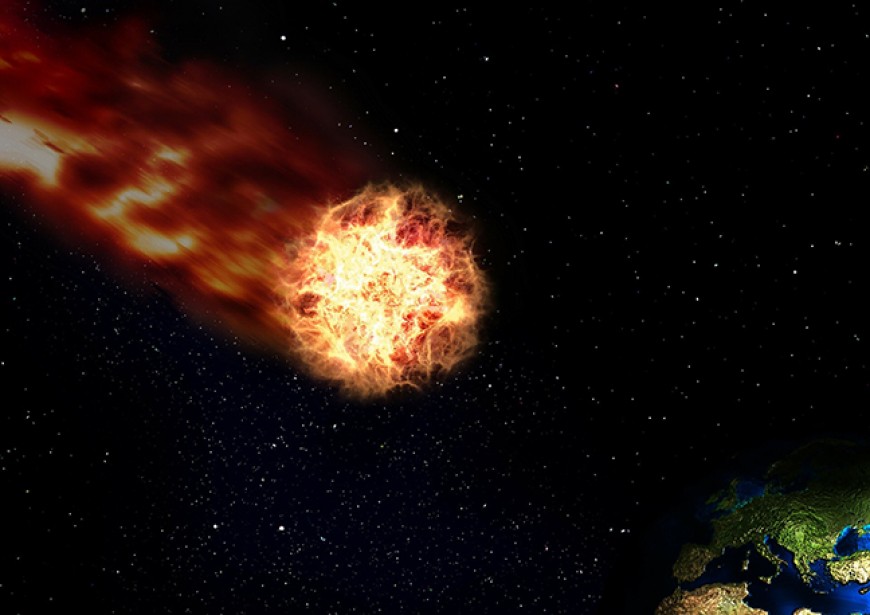 In the new Netflix movie “Don’t Look Up,” two actors (Leonardo DiCaprio and Jennifer Lawrence) playing fictional Michigan State University astronomers discover a comet on a collision course with Earth and struggle to convince people, including the U.S. president (played by Meryl Streep) to take them seriously. The film is a satire about society’s inability to cope with climate change.

Below, several real-world scientists from the University of Michigan comment on the movie’s climate-change messages.

Jeremy Bassis, associate professor of climate and space science and engineering, is a geophysicist studying how ice sheets and glaciers respond to climate change. His work has helped to explain why the disintegration of ice sheets has been faster than predicted.

“‘Don’t Look Up’ is an obvious metaphor for climate and our collective lack of action,” Bassis said. “There is some pitch perfect exasperation that nobody is listening to scientists. But ultimately where the metaphor fails—and where we can draw hope—is that we as scientists and members of the community aren’t powerless actors.

“We don’t have to wait for national or international agreements. We can instead work with local communities to develop mitigation plans and adaptation plans to avoid some of the worst effects of climate change. We don’t need to just helplessly wait until we get our act together. Most of our sea level adaptation is happening at the local and regional scales, and scientists need to be actively engaged with planners to make sure we are asking the right questions to support the decisions that are being made today.”

Julia Cole is an interdisciplinary paleoenvironmental scientist who has published more than 80 peer-reviewed studies on recent and rapid climate change. She is a professor in the U-M Department of Earth and Environmental Sciences, where she teaches on climate change, ocean science and science communication.

“In ‘Don’t Look Up,’ even a looming planetary catastrophe—an incoming comet guaranteed to strike Earth—isn’t enough to overcome the short-term interests of politicians, the media and greed. In the end, the planet loses,” Cole said. “But unlike the movie, with climate change there’s still hope: We know how to fix this problem. The climate disasters of the past year—fires, floods, storms, heat waves—have made it crystal clear that climate change is no longer a future risk. It’s a here-and-now, multipronged catastrophe that demands global action. It’s past time to get serious about cutting out fossil fuels, before the problem gets too big to solve.

“The lessons of this movie for climate change aren’t new, but they remind us of a few key points: The science is unequivocal, so believe it. International cooperation is a must—we can’t fix this alone. Beware talk of silver bullets; proven technologies such as renewable energy and efficiencies can get us a long way, even as we continue to innovate.

“The New Year reminds me that 2022 marks the 30th anniversary of the international treaty in which the nations of the world agreed to work together to combat dangerous climate change. Since that time, we’ve nearly doubled the amount of human-produced carbon dioxide in the atmosphere. As in ‘Don’t Look Up,’ delay has made the problem much more difficult to solve. I continue to think we can solve it, but we have a lot of work to do.”

Jonathan Overpeck is an interdisciplinary climate scientist and dean of the U-M School for Environment and Sustainability. He is an expert on paleoclimate, climate-vegetation interactions, climate and weather extremes, sea-level rise, the impacts of climate change and options for dealing with it. He served as a lead author on the authoritative Intergovernmental Panel on Climate Change 2007 and 2014 reports.

“The movie is a funny one to watch, but its messages are deadly serious,” Overpeck said. “Climate change is a planetary threat that we must act quickly to halt. The science is clear, and we have the solutions in hand, but we need the political courage to act fast.

“While climate change doesn’t threaten to wipe out all life on the planet, it certainly threatens many lives, livelihoods, economies, communities and global biodiversity in very real ways. And waiting to act to solve a planetary crisis like climate change can greatly increase the costs to us all.

“The movie also highlights how politicians, political beliefs, special interests and some media outlets actively try to distract or divert regular people–citizens–from gaining scientific understanding that is critical. Ignoring science can put individuals, communities and even a whole planet at serious peril.”

Trish Koman is an assistant research scientist in environmental health sciences at the School of Public Health and faculty research program manager at the College of Engineering Multidisciplinary Design Program. In recent studies led by Koman, researchers mapped the exposure to wildland fire smoke in California and the communities in Michigan that will bear the brunt of climate change.

“Global climate disruptions are everywhere we look, and they are impacting public health,” she said. “In 2021, there were over 18 climate-related disasters in the U.S. totaling more than $1 billion each and negatively impacting health, especially for children and other vulnerable populations. We need to work together to take care of our climate, which is our life support.”

“This movie deals with a very serious threat to Earth, the impact of an asteroid of the size that killed the dinosaurs. There is a real NASA Planetary Defense Coordination Office. I would hope that the real response to such a threat would be very different,” he said. “The observing technique is correct—taking multiple pictures of the comet over time and working out the orbit.”