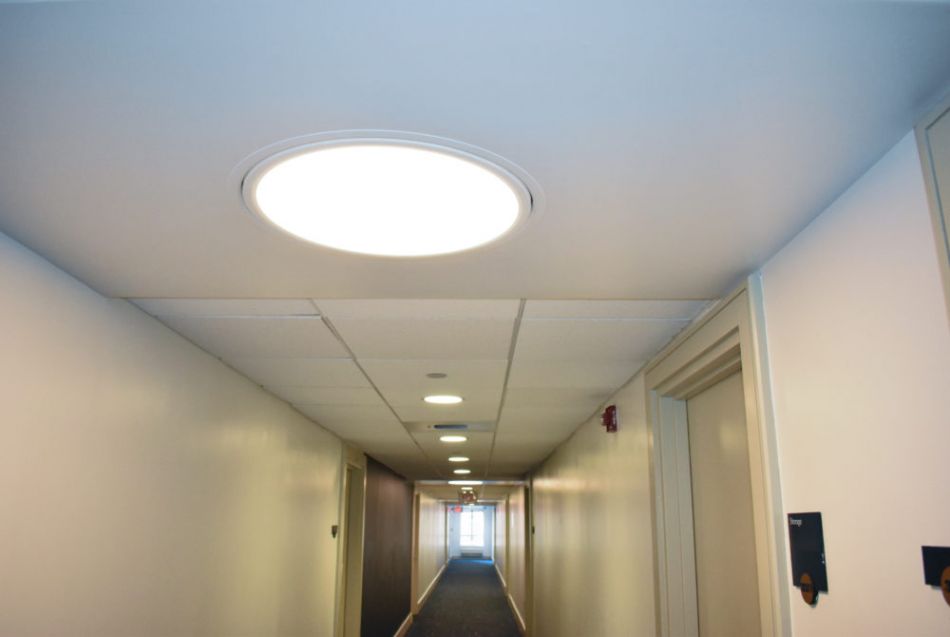 University spokeswoman Crystal Nosal said the University’s use of energy-efficient lights has saved 18 million kilowatt-hours over the past four years, the amount of energy needed to power 2,150 homes for a year, removing 2,700 cars from the road for a year or planting 210,000 trees. Energy efficiency experts said GW’s push to switch to LED lighting is consistent with other U.S. universities’ efforts to lower overall carbon emissions.

“From a GW perspective, these energy savings are enough to power District House since construction, with enough remaining to power Amsterdam Hall the past four years,” Nosal said in an email.

LED light bulbs last for about 25,000 hours and cost $1 in annual energy, according to the Department of Energy’s website. Officials piloted LED lights to a room in Amsterdam Hall in 2016 to track how much energy the lights could save.

Nosal said just more than half of the University’s 24 residence halls are completely outfitted with LED lights. She said “significant portions” of six halls like International House, South and JBKO halls have LED lights.

Cole, Clark, Hensley, Merriweather and Lafayette halls were not included in the list Nosal provided as having significant portions of LED lighting.

Nosal said the majority of academic buildings, like the School of Media and Public Affairs and Gelman Library, are equipped with LED lights. She said officials added LED lights to residence halls at times least disruptive to students’ lives, like over the summer and when a hall was scheduled for construction.

“This summer’s LED projects are currently being planned based on these criteria,” Nosal said. “Typical LED lighting upgrade projects produce a payback within several years. These savings are enhanced by rebates from the D.C. Sustainable Energy Utility.”

She declined to say how much money the University has saved over the past four years from using LED light bulbs.

Michael Craig, an assistant professor of energy systems at the University of Michigan, said institutions will almost always save money by switching from traditional light bulbs to LED lights.

“Every single study says if you have incandescents, throw them out immediately and put in an LED,” Craig said. “You will pay some amount of money upfront, but you will save money and you will reduce emissions. Zero uncertainty about that.”

He said the University could hold off on adding light bulbs to 100 percent of its buildings because replacing compact fluorescent light bulbs can be more costly than the amount of money saved.

“I think the key question would be ‘One, do they actually save money for replacing right away?’” he said. “‘And two, how much do they care about carbon emissions?’”

James Sweeney, a professor of management science and engineering at Stanford University, said Stanford has made efforts for “quite a while” to reduce its total carbon footprint, which included adding LED lights to its campus. He said replacing incandescent light bulbs is easier than replacing fluorescent light fixtures, which often require more technical work to replace.

“If the fluorescent lighting that has been built into the ceilings are built into the infrastructure, it takes some more work to get in there and take out the old ones and replace it with whole new lighting fixtures,” Sweeney said.

He added that the money that officials save from using LED lights is higher than the money they put upfront to pay for the LED lights.

“This is the opposite of a barrier,” Sweeney said. “It’s a benefit for not having to constantly or frequently replace a light bulb. You do it once and you’re done for eight to 10 years.”

He said the University should opt-out from switching LED light bulbs in areas in which the light is turned on for only a short period during the day, like a closet.

“If it’s only on say for half an hour per day, well then the energy savings and the cost savings just not very much,” Glicksman said. “And it certainly would not be high enough on the priority list.”

This article appeared in the March 9, 2020 issue of the Hatchet.