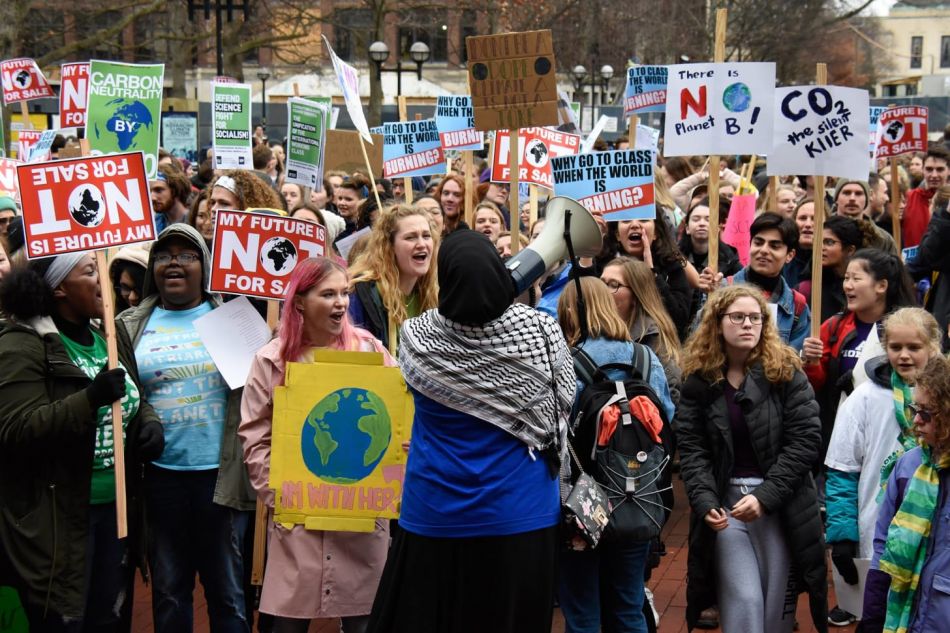 Photo via Climate Action Movement at the University of Michigan

In 2011, the University of Michigan announced its intention to cut carbon emissions by 25 percent by 2025. But seven years later, carbon emission reduction had stalled at just 5 percent. So after U-M President Mark Schlissel announced a new planning committee to develop a plan for carbon neutrality on February 4, a group of U-M students decided to demand more of their university’s approach to addressing climate change.

The announcement of The President’s Commission on Carbon Neutrality was met with concerns from student activists almost immediately. The Commission, which is made up of university professors, two energy industry officials, a representative from the City of Ann Arbor, the executive director of the Michigan League of Conservation Voters, and two U-M students, is tasked with creating a set of recommendations to President Schlissel and the Board of Regents.

U-M student Logan Vear is one of the students who points to the university’s slow track record making progress on its sustainability goals. She is concerned the recommendations of the Commission will not lead to actionable policies. In addition to the university’s sluggish progress on its 2011 goal, she says proposals from a 2015 report by the President’s Committee on Greenhouse Gas Reduction have been largely ignored by U-M’s administration.

In 2017, Vear, who is one of the two students appointed to the new Commission,  decided to form a student group called Climate Action Movement with co-founder and fellow U-M student Julian Hansen.  “We realized that something needs to change,” Vear says.

On March 15, CAM joined forces with Washtenaw Country Climate Strike, a coalition for climate activism in the Ann Arbor area, to organize a protest. U-M students and faculty marched with Washtenaw County community members and local high schoolers to participate in the first Global Climate Strike for Future, inspired by Swedish teenager and climate activist Greta Thunberg. In Ann Arbor, a group of nearly 3,000 people was among those who took to the streets to express their concern over the climate crisis and voice their demands.

Following a walkout at 11:11 a.m., the protestors participated in a walk around Ann Arbor that concluded around 1:30 p.m. with a sit-in at the Fleming Administration Building.

Solomon Medintz, a student at U-M and a member of CAM, said there was a “mind-blowing amount of energy” as the marchers reached the building. “We read our demands before we entered, and then a lot of people were supportive of what we wanted, and so a lot of people poured in [to the building],” Medintz says. They also communicated the demands to an administrative assistant inside the building.

Protestors were given a 15-minute warning to leave and told they would be arrested if they did not comply. Ultimately, 10 protestors, two of them minors, were arrested and given citations for trespassing. Their pre-trial took place on September 13 in Ann Arbor. An official motion hearing is scheduled for October 10.

In April, President Schlissel held a meeting to discuss the university’s plan to address climate change. But members of CAM were not satisfied with the format of the meeting.

“We wanted a chance to actually have a real back-and-forth with President Schlissel,” Medintz says.

The Commission will also define and create a timeline for carbon neutrality and suggest areas of research. Internal teams on the Commission will evaluate nine areas — from campus culture to building standards — in which the university can reduce its carbon footprint. A document outlining the Commission’s mandate can be found here.

Activists are pushing for accelerated action and an expanded set of concerns. They want the university to consult local Indigenous groups, cancel the planned expansion of natural gas at Central Power Plant, and create a carbon budget for the university, among other demands.

The most contentious demands include the stipulation that energy officials not be given decision-making roles on the Commission, and the demand for divestment from fossil-fuel industries.

Forrest says that the industry experts' knowledge of energy generation and transport is valuable to the Commission. Haverkamp agrees, pointing out that nearly one-third of emissions generated by the university comes from purchased electricity from DTE. “It would be difficult to figure out how to approach that huge of a component without active engagement with them,” she says.

Forrest adds that there is no inherent conflict of interest because the Commission is not making recommendations about energy contracts.

In addition to disagreement over the role of energy officials on the Commission, activists are also concerned about the university’s stance on divestment.

Rafa Rivera, a doctoral candidate in U-M’s Earth and Environmental Sciences program, is involved in climate activism at the university and has doubts about the Commission’s efficacy. Rivera says that the university’s refusal to consider divestment is “a killer of any plan.” Haverkamp and Forrest declined to comment on divestment because it is outside the scope of the Commission’s mandate.

“The fact that the university absolutely refuses to consider divestment in its calculations of carbon neutrality is willful ignorance,” says Medintz, who penned an op-ed in The Michigan Daily, the university’s student newspaper, on the subject. “They know that it matters and they choose to ignore it anyway.”

The university’s public affairs office confirmed U-M’s position on divestment. “The university has long taken the position to shield the endowment from political pressures and to base our investment decisions solely on financial factors,” says Dana Elger. “U-M will not divest from fossil-fuel investments.”

The University of California system announced on September 18 that it will divest $80 billion from investments fossil fuel industry — not because of political pressure, but because the UC system believes investing in fossil fuels has become risky.

U-M has divested twice in its history. In 2000, the university divested from its investments in tobacco, and in 1978, during Apartheid, it divested from American companies with holdings in South Africa. In 2005 the university outlined the three requirements necessary for divestment: “The concern to be explored must express the broadly and consistently held position of the campus community over time; There must be reason to believe that the behavior or action in question may be antithetical to the core mission and values of the University; There must be reason to believe that the organization, industry or entity to be singled out may be uniquely responsible for the problems identified.”

Samuel Stolper, an environmental and energy economist and assistant professor at U-M, believes divestment should be considered as part of a decarbonization plan. “In my opinion, the value of divestment lies in its potential to change norms,” Stolper says. “I think changing norms related to emissions-intensive activities is a part of the solution to climate change.”

Michael Craig, an assistant professor of energy systems at U-M, is also in favor of divestment. However, Craig said the environmental benefits of divesting might be mostly symbolic, and emphasized the need to examine the impact divesting can have on economic and social systems.

Another main point of disagreement between student activists and the university relates to a sense of urgency. After all, it's the students who will inherit the world being created by today's policies.

“The students, obviously, are feeling this unprecedented level of fear and overall despair, a little bit, with climate change," says Vear. "We really want to shift that focus and make it optimistic and make it hopeful and know that there is an ability to change and an opportunity to change. All we have to do is take it.”